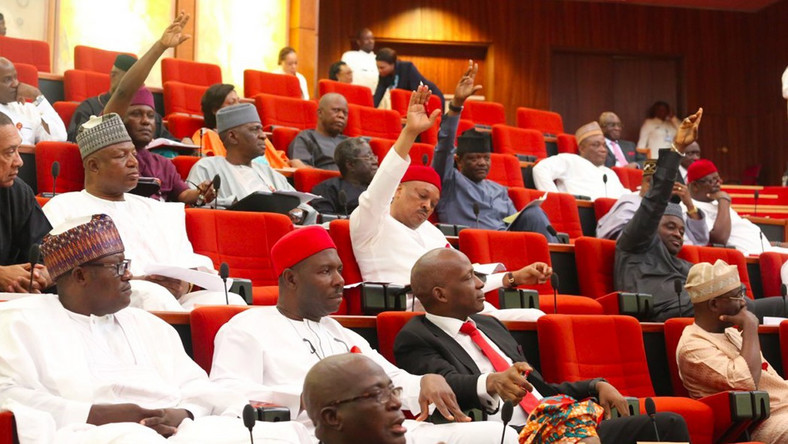 There are indications that the members of the Senate may have to commence their annual two-month break should President Muhammadu Buhari fails to submit his ministerial list to the lawmakers before Friday, July 26, 2019, for approval.

Punch reports that the lawmakers will not delay the commencement of their recess on and that they are not anxious about the list.

Five months after his re-election, President Buhari has yet to constitute his cabinet.

Some senators who spoke to Punch on condition of anonymity over the development are said to have complained about the president’s administrative style.

Some senate members are complaining that President Muhammadu Buhari is delaying his ministerial list too long. (Twitter/Aso Rock)

This, according to Punch has brought some of the lawmakers to the conclusion that President Buhari’s failure to unveil his ministerial nominees for confirmation would not stop them from proceeding on their annual recess on July 26.

A senator from the South-East reportedly said, “What I know is that we will ensure proper screening of all the nominees and we won’t allow anybody to rush us.

“The best time to attend to the list is now, not when we would have a few days left to proceed on recess.”

A female senator was also reported to have said that “The President was re-elected. Nobody expects that Nigerians would wait for four months before he would unveil his proposed cabinet members.”

On his part, the Chairman, Senate Ad hoc Committee on Media and Public Affairs Senator Adedayo Adeyeye said the list would be considered whenever the president submit the list.

He said, “It is the prerogative of the President to choose the time he will submit the list of ministers and it is the duty of the Senate to screen and approve the nominees to appointed.

“If the President submits the list before we proceed on recess later this month, we will give it necessary consideration.

“If on the other hand he submits it when we are already on recess, it is not unusual to recall senators from break in the overriding national interest.

“We could break the recess to consider the list whenever it is sent. Whatever it is, we are ready.”

In 2015, President Buhari waited for six month before he sent his list of cabinet to the Senate. Now, it’s been over four months since he was re-elected for his second term and the Senate is yet to receive the list.