Wearing big suit and tie everyday when the salary you earn does not march up is sometimes more traumatic than being completely jobless. In fact, when you see bankers dressed sharply and driving luxury cars, please be slow in envying them. 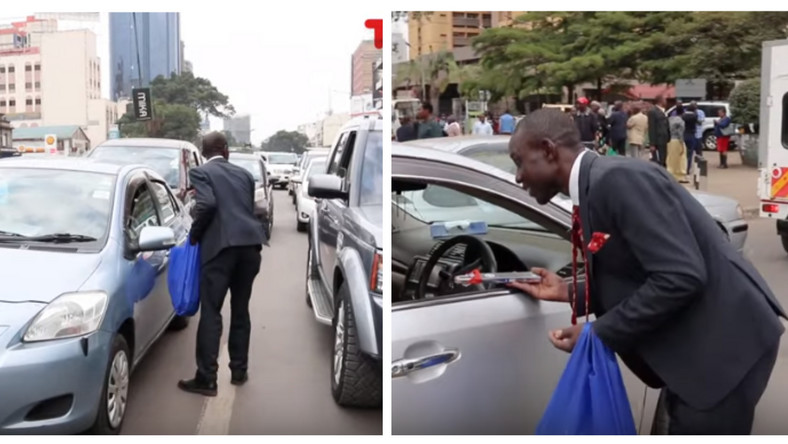 A Kenyan banker, Edgar Otieno was compelled to quit his job at Barclays bank in the East African country to sell pencils in the streets, which he claims he earns more money from than what he used to receive monthly as salary at the bank.

The 42-year-old man told Tuko.co.ke that, before he even became a banker, he had been hawking pencils in the streets right from age 25. He would take the pencils in bulk from a certain company and sell on commission basis.

“I was so good at it, that I was named best agent multiple times. When the company folded in 2005, I decided to continue with the job,” he told the news portal.

Edgar is always seen in the streets, sometimes by his colleague bankers and managers, wearing his neatly pressed suit and tie as though he was still a banker, but he is actually selling pencils.

“Some people wonder why I show up every morning sharply dressed yet my work involves chasing after customers and convincing them to buy pencils; in sales, people buy you first before they buy whatever you are selling,” he revealed.

The determined man said that the money he was being paid at the Barclays bank was woefully inadequate for him, hence the decision to quit and make time for what he loves doing best.

Some of his former colleague bankers confirmed that he was indeed a banker, but chose to switch to strict hawking which he enjoys doing unapologetically.

“We worked with him at Barclays Bank, but he quit and went back to hawking. He makes good money,” Jymoh Msema Kweli wrote when photos of Edgar emerge online.

Another one, Bancy Roba said: “I love his heart. One of us poached him for insurance, but he didn’t go for long. He preferred hawking.”

Watch Edgar Otieno in the video below as he narrates his awe-inspiring story: