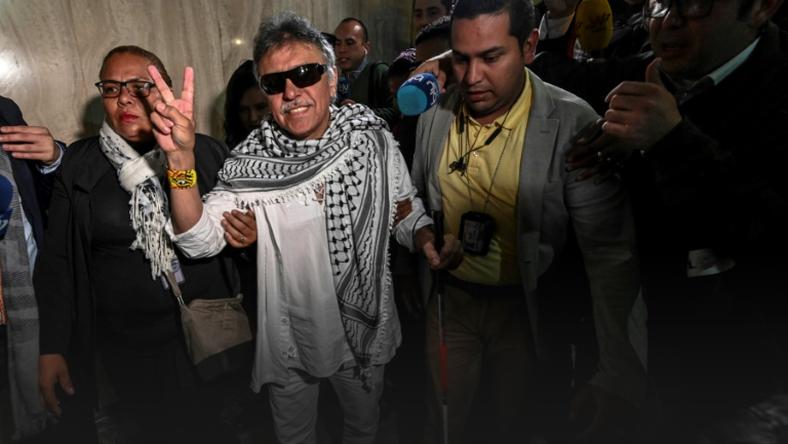 Jesus Santrich, whose real name is Seuxis Paucias Hernandez, failed to appear in court on Tuesday to testify about an alleged attempt to sell cocaine, after which the Supreme Court ordered his arrest.

Santrich, a partially sighted 52-year-old, helped negotiate the 2016 peace deal with the Colombian government that ended a half century of conflict by the Revolutionary Armed Forces of Columbia (FARC.)

That deal turned FARC into a political party, the Common Alternative Revolutionary Force, which uses the same acronym as its rebel predecessor.

The peace deal guaranteed FARC 10 seats in Congress, one of which the party assigned to Santrich.

However, he was unable to take his seat in July 2018 because he had been arrested three months earlier on suspicion of participating in the trafficking of 10 tons of cocaine to the US, which is seeking his extradition.

He was eventually released around six weeks ago following a Supreme Court order and last month was finally sworn in to Congress.

Duque’s government, under pressure from Washington, opposed Santrich’s release and has repeatedly expressed its intention to extradite him.

The peace deal, signed by Duque’s predecessor Juan Manuel Santos, prohibits the extradition of former fighters but the allegations against Santrich date from June 2017 to April 2018, after the accord was signed.

“No country can protect him … and if there’s someone protecting him, we’ll denounce them internationally,” said Duque.

Duque was one of the first heads of state to recognize Venezuela’s opposition leader Juan Guaido as acting president in January.

You are not a saint either, Fayose slams Obasanjo over his comment on Kashamu