The exit of John Bolton as national security advisor removes the most forceful voice pushing President Donald Trump’s foreign policy to the right with all eyes on whether his successor will signal a fresh course. 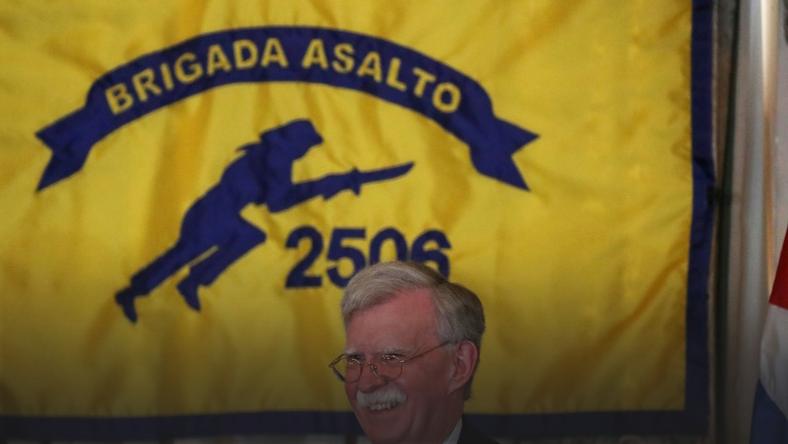 Bolton, a 70-year-old master of Washington infighting, succeeded in championing hawkish stances on Iran and Venezuela and pressing Trump to hold back from an accord with North Korea at a February summit.

Bolton’s worldview overlapped in some areas with Trump’s, especially in their “America First” contempt for international organizations.

But the mogul turned president has long called for fewer military interventions overseas and acknowledged disagreements as he announced Bolton’s departure Tuesday.

Trump has promised a replacement next week and the choice could signal the shape of his foreign policy for the rest of his term.

Will Trump pick another hardliner, albeit one who is more congenial? Or will he choose a more traditional figure such as Bolton’s predecessor, military scholar H.R. McMaster?

Or could Trump go in a third direction in his third year in office, finding a libertarian-minded critic of foreign wars along the lines of Republican Senator Rand Paul?

“The threat of war around the world has been greatly diminished with John Bolton out of the White House,” crowed Paul, an advocate of pulling troops from Afghanistan and diplomacy with Iran.

Bolton, however, had staunch defenders among more militaristic Republicans. Senator Ted Cruz asked if “deep-state” bureaucrats “have finally convinced the president to go soft on Iran.”

Bolton’s departure, and signs he intends to be outspoken from outside the White House, “sets the stage for a GOP civil war over foreign policy,” wrote Brookings Institution senior fellow Tom Wright, referring to the Republican Party.

For now, Bolton’s departure leaves foreign policy in the hands of Secretary of State Mike Pompeo, who shares hawkish views on Iran and other key issues.

But unlike Bolton, Pompeo is widely seen as holding future political ambitions and is careful never to show any daylight with Trump.

Mindful that he is up for re-election next year, Trump for months has “wanted to pivot to striking deals with America’s enemies” including Iran, Afghanistan’s Taliban, North Korea and even Russia, Wright said.

“Pompeo was willing to accept this to shape it. Bolton was not and sought to sabotage it,” Wright wrote on Twitter.

Trump has voiced willingness to meet Iranian President Hassan Rouhani at the UN General Assembly in New York later this month after France launched a bid to ease tensions.

Rouhani says he will only consider a meeting if the United States removes sanctions, a prospect that is anathema for Bolton, who is close to Iran’s opposition militants and in the past has called for military force and regime change.

Asked after Bolton’s departure if Trump could meet Rouhani, Pompeo — who for months has rarely missed an opportunity to bash Iran — was strikingly upbeat.

“Sure,” Pompeo replied. “The president has made very clear he is prepared to meet with no preconditions.”

Many doubt Rouhani would even want to meet Trump, who has boasted of the pain inflicted on Iran by US sanctions. Rouhani even found it politically impossible to do more than a phone call with Trump’s predecessor Barack Obama, who brokered a 2015 nuclear deal from which Trump walked away.

Bolton was also among the few officials who mused about a military response on Venezuela, where Trump has been unsuccessfully seeking to remove leftist leader Nicolas Maduro.

Trump has spoken little in recent weeks on Venezuela and reportedly grew upset with Bolton for predicting a quick toppling of Maduro.

Bolton likewise had pressed Trump only to accept a more stringent nuclear deal with North Korea, which famously once branded Bolton “human scum” for his hard line.

“Bolton’s exit may lead to a more realistic, step-by-step approach to North Korean denuclearization, where Bolton’s ‘all-or-nothing’ approach to easing sanctions has produced a deadlock despite three Trump-Kim summits,” said Alexander Vershbow, a former US ambassador to South Korea and Russia.

But Vershbow, now at the Atlantic Council, feared that, without Bolton’s influence, Trump could curtail military support for Ukraine as he curries favor with Russian President Vladimir Putin.

Democrats universally rejoiced at Bolton’s departure, while saying he should never have had the job.

“The only question about his replacement is the same after all Trump resignations,” said Representative Adam Schiff. “Will we go from bad to worse?”

US election: Georgia races heat up with control of the Senate in the balance