Share
Prime Minister Justin Trudeau kicked off the fight of his political life Wednesday, under attack for an ethics scandal and other controversies as he opened a campaign for Canada’s October 21 general elections. 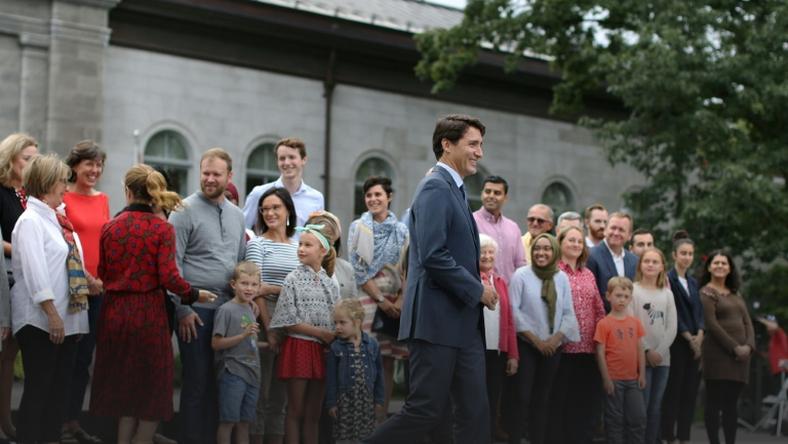 Polls showed Trudeau, once the youthful golden boy of Canadian politics, in a neck-and-neck race with Conservative Andrew Scheer who launched his bid for leadership by accusing the Liberal prime minister of lying “to cover up scandals.”

“He has lost the moral authority to govern,” Scheer declared, before boarding his campaign jet.

The parties have already been wooing voters with pre-election ads, announcements and whistle stops in key battlegrounds across the country.

But Governor General Julie Payette’s dissolution of parliament, at Trudeau’s behest, marked the official start of the race to the October 21 ballot.

As Trudeau left the viceregal’s residence, he said there was “a huge amount of work still do” and that it was “always possible to do better.”

This election, he said, was a choice between “the failed policies” of his Tory predecessor or “continuing to move forward” with his team.

Elected by a landslide in 2015, Trudeau and his Liberal Party are now battling to hold onto a majority in parliament, with challenges rising up not just from the Conservatives but also on the left.

New Democratic Party leader Jagmeet Singh and Greens party leader Elizabeth May are positioning themselves as spoilers with the aim of denying Liberals or Conservatives a majority.

Voters will choose all 338 members of the House of Commons, with an average of polls showing the Liberals in a dead heat with the Tories.

Climate change and affordability are widely predicted to be top issues in the campaign.

Throughout his first term, Trudeau cast himself as a champion in the fight against global warming. On Wednesday, he promised “a more ambitious climate plan,” while Scheer has vowed to roll back a federal carbon levy as his first act in office, if elected.

The Canadian economy is strong, posting second-quarter growth of 3.7 percent and almost half a million new jobs created in the last year.

But the economic gains have not been widely felt, and Canadians have increasingly expressed concern about a rising cost of living.

The Bank of Canada also warned last week that the economy, facing international headwinds, will slow in the second half of the year, with economists worried about a prolonged trade war between the world’s two biggest economies, the US and China.

The Liberals over the past four years legalized cannabis, boosted Canada’s resettlement of refugees, negotiated a new continental free trade deal with the US and Mexico, and concluded trade pacts with the EU and Pacific nations.

But Trudeau’s stumble on the ethics front dealt a major blow to his image as a fresh face out to change politics as usual.

The scandal broke when two members of his own cabinet accused him and his aides of meddling in the prosecution of engineering giant SNC-Lavalin to save jobs.

The cabinet ministers — both women, one of them Canada’s first indigenous attorney general — were expelled from the party.

The episode cost Trudeau support among women, indigenous people and young people — constituents that helped propel him to victory in 2015.

Trudeau’s political agenda also was often sidelined by crises, including diplomatic and trade rows with the US, Saudi Arabia and China.

China has detained two Canadian nationals in apparent retaliation for Canada’s arrest of a Chinese tech executive on a US warrant.

As host of the 2018 G7 summit, Trudeau found himself accused of weakness and dishonesty by US President Donald Trump after the US suddenly pulled out of the joint final statement.

Nationalizing an oil pipeline to salvage the construction project after years of delays due to protests and legal challenges also drew the ire of environmental activists that year.

In recent months, the Liberals managed to claw back some of their losses. A survey average showed support for both the Liberals and Tories at 33.8 percent.

The latest Mainstreet Research poll on Tuesday, however, gave the Liberals a slight lead, and suggested that the Greens could leapfrog the New Democrats to claim third place in parliament for the first time.

Previous Buhari reacts to tribunal ruling, says he wasn’t worried all along
Next Bolton exit opens battle on how Trump handles world