Us Never To Issue Visa

The US government is putting an end to the practice of travelling to the United States to secure automatic citizenship for children by giving birth to them on American soil.

The Donald Trump administration is ready to stop foreigners from obtaining American citizenship for their children just by giving birth to them in the country. (Business Insider)

Nigerians who want to have their babies delivered in the United States of America will no longer be able to do so as the US government is putting an end to the practice.

This was announced on Thursday, January 23, 2020, in a statement by the office of the press secretary.

The US government says it will no longer issue visas to ‘aliens’ seeking to enter the country for birth tourism from Friday, January 24, 2020. 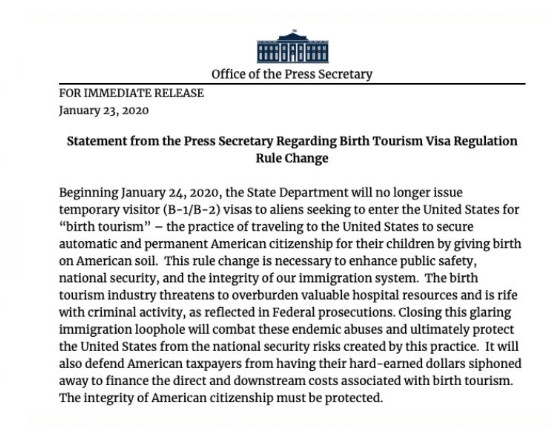 The statement that announced the rule change in birth tourism.

According to the statement, the rule change was necessary to enhance public safety, national security and the integrity of the country’s immigration system.

The statement further says the practice of travelling to America to secure automatic and permanent citizenship for children by foreigners threatens to overburden the US hospital resources.

HushPuppi Denied Bail in US

Previous Break Financial Limits
Next ‘You’ll never be president’, Yoruba elders attack Tinubu for refusing to speak up on Amotekun