The former NDDC boss has accused the minister of corruption and coercing her to take an oath of secrecy. 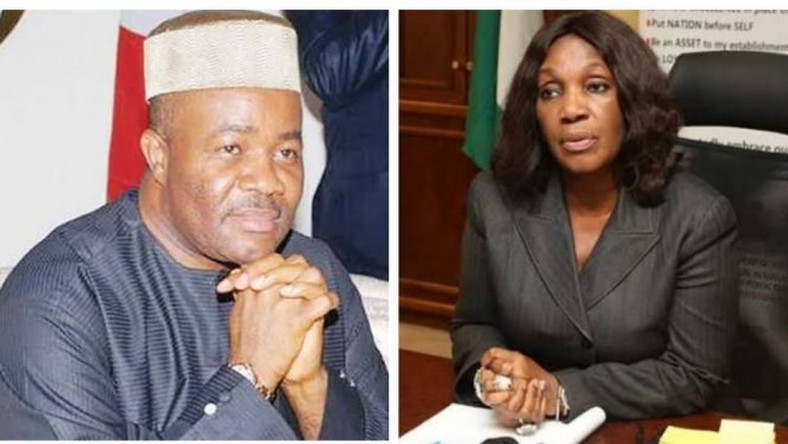 Nunieh told AriseTV that she had to slap Akpabio for trying to “come up on me.”

She alleges that Akpabio removed her from office because she refused to yield to his sexual advances and corruption motives.

She also alleges that she refused to swear to his oath of allegiance.

“I am the only Nigerian woman…the only Ogoni woman that has slapped him. I slapped him because of his plan B. He wanted me to take a blood oath of secrecy in Abuja,” she said.

She added that Akpabio tried to induce her or shut her up with money.

“Since he couldn’t get me to take that money. He thought that Plan B..if he could come up on me….He didn’t know that I’m a Port Harcourt girl. Port Harcourt girls are not moved by money. By somebody telling me that he will make me a substantive MD.

“Akpabio’s meeting with me is either at Apo or Meridian or whatever. Those are his meetings. I slapped him,” she said.

Asked by hosts of the breakfast show to clarify what she meant by “come up on me” and if she meant rape or sexual harassment, she said “harassment sounds better, not rape.”

Pointedly asked if she is accusing the minister of sexual harassment, she shot back: “Yes, I am accusing him.”

Last week, Nunieh accused Akpabio of orchestrating the bombing of an oil pipeline.

In his reaction, Akpabio described Nunieh as an angry woman who had problems with her former husbands because of her temperament.

“Let me just point this out. The last managing director that you mentioned. No matter the allegation, I wished that she would go to a hospital and get some injections and relax.

“I am saying that there is something wrong with her temperament. You don’t need to ask me. You can ask about four other husbands that she married. You also need to bring all the former husbands. At least bring four of them that she has married in the past to this studio, so that you ask them questions, one after the other. Because it looks like a character problem.

“What I am seeing here is that if somebody comes up and stands on a television channel wawawa…then the whole world…Nigerians love bad news. I am not that type of person. I am a minister and my job is to protect the citizens of this country and protect the administration of Mr. President.

“I must tell you that even President Buhari was not aware of all these things because I did not want to bother the man. He will be shocked,” Akpabio said.

Akpabio served as Governor of the southern, oil rich state of Akwa Ibom from 2007 to 2015.

He represented Akwa Ibom Northwest district in the senate after his tenure as governor.

In August of 2018, Akpabio resigned the position of Minority Leader of the Senate after announcing his defection from the PDP to the governing APC.

On August 21, 2019, Akpabio was sworn in as Minister of the Federal Republic.

The NDDC– a federal government agency established by former President Olusegun Obasanjo in 2000 with the mandate to develop an oil-rich but impoverished Niger Delta region–is within Akpabio’s purview.

The NDDC has been mired in allegations of corruption and mismanagement since it was set up.

Akpabio did not immediately respond to a Pulse request for comments on the sexual harassment allegation tendered by Nunieh.